T he Secret Garden, otherwise known as the Magic Garden or Secret Buddha Garden can be found in the hills of Koh Samui and was built by a local Samui fruit farmer, Nim Thongsuk, starting it in 1976 when he was 77 years old.
The Secret Garden is a beautiful landscaped garden featuring flowers and trees native to Koh Samui and Thailand and many Buddha statues with different meanings arranged in scenarios representing different ideals, which your tour guide will explain to you. Winding through the garden is is a little stream and a series of miniature waterfalls.
The only way to get there is through the jungle, rivers and mountains by 4×4. The roads leading through the hills is impressive but stick to the main road, it can be interesting turning the car around on a very steep hill with curves in it and a drop down at one side of a couple of 100 meters. 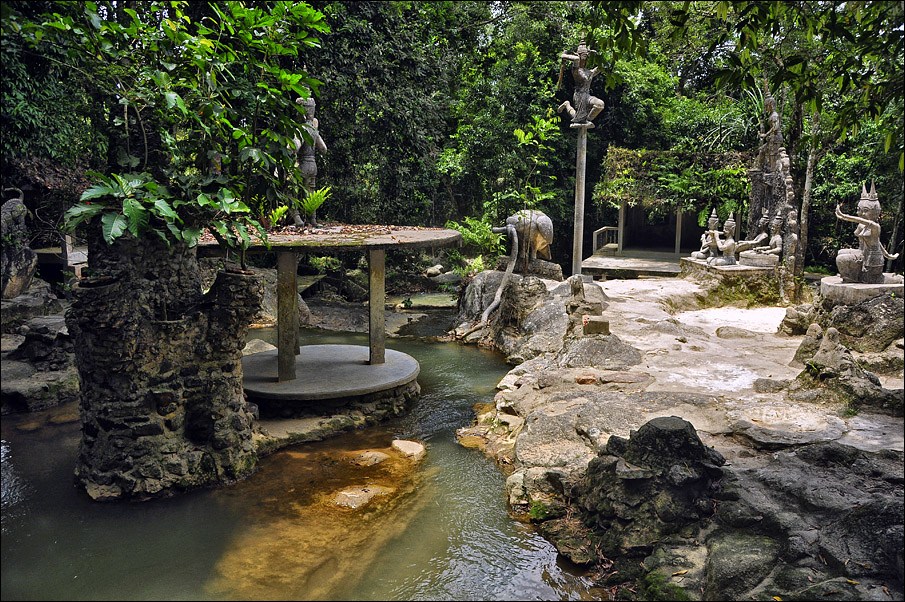 T he journey takes about 2 hours starting at the back of the Lamai temple and is only recommended for experienced “outdoor” drivers. Another way to get to the garden is by joining one of the safari tours.
It’s quite worth a visit and on the way you can make a stop-over at Koh Samui’s highest point overlooking the island from north to south, the surrounding islands as well as the mainland.
Directly opposite Wat Khunaram near Lamai is now a new road that leads through the very steep hills to the Secret Garden, also known as the Magic or Buddha Garden.
Secret-Buddha-Garden-PondOnce inside the Secret Garden (having paid the 80 THB admission fee), you enter a beautiful piece of nature with small, miniature waterfalls and small statues are all over the place. It’s a fantastic transition into a different world, walking down the stairs to the actual ‘garden’.

A little stream runs through the whole garden and the above picture has two stone bodies lying in the flow of the stream. It seems that they used some imagination and created a few unexpected scenery’s. Very nicely done!
I’m sure that all the statues have meanings but it’s difficult to near impossible to find out their Buddhist meaning since there are no guides or brochures with an explanation. Near the entrance is a small sitting area with the typical Samui souvenirs but unfortunately with no actual information on the Secret Garden.
Surrounding the Secret Garden around in the hills are Durian farms bamboo trees and coconut plantations in steep valleys with stunning views over Koh Samui, all the way down to the distant ocean. 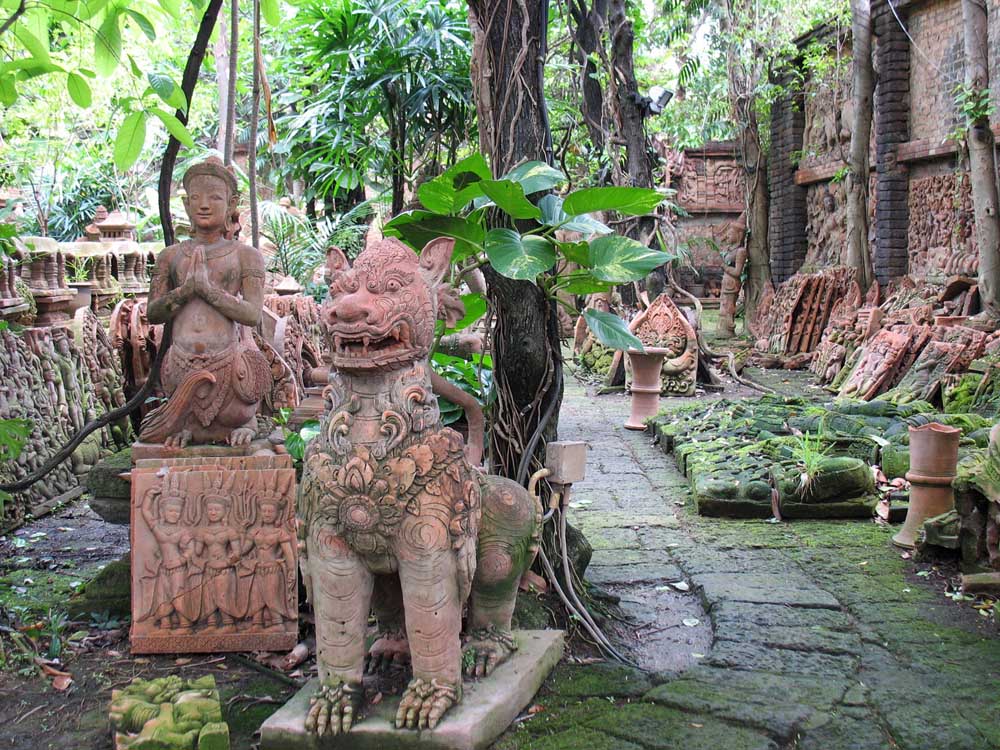 S ecret Buddha Garden is hidden away high in the hills in Koh Samui’s interior, offering majestic views and an unusual collection of statues amid lush jungle surrounds. The gardens are a creation of an old Samui fruit farmer, Nim Thongsuk, who in 1976 began erecting several statues and temples around his family’s verdant land. The statues depict a number of animals, deities and humans in various poses, including one of Khun Nim himself, in a relaxed position sitting on a rock. Khun Nim continued to work developing his garden until his death at the age of 91.
The garden surroundings are cool and peaceful, with a waterfall and stream flowing through, all shaded by thick jungle foliage. The Secret Buddha Gardens are found in Samui’s interior, to the north-west of Lamai Beach. With the steep and bumpy road, getting up here is a challenge best done in a 4×4 vehicle. Many visitors choose to come here on a day trip that includes a tour of the gardens.

S ecret Buddha Garden, also known as Heaven’s Garden or Magic Garden, is the kind of place where each visit brings some new discoveries. With statues of all shapes and sizes scattered around the grounds, a wrong turn or a closer look behind a tree may yield yet another hidden surprise.
magic buddha garden fishDuring his working years, the Garden’s founder Khun Nim was known as an innovative durian farmer, who helped Samui become famous for this prized pungent fruit. Upon his retirement he opened his family’s land to the public and assembled a team to develop the garden, sculpting many figures representing mainly Buddhist folklore. Each statue has a story to tell, and most Thais will know the meaning and mythology behind these evocative works of art.
Secret Buddha Garden sits atop the Tar Nim Waterfall peak. The views from within gardens and on the road leading up to it are spectacular, with many stops to enjoy the island panorama along the way.
*article:http://www.samuipedia.com/koh-samui/attractions-places-of-interest/secret-garden-buddha-shrine/