W at Phra Yai, better known as the "Big Buddha", is an iconic Ko Samui image. Located on route 4171 at the end of Bang Rak, as one rounds the bend to Plai Laem, this huge statue is glimmering gold and visible from kilometres away.
Perched atop a platform, it’s much higher above sea level than its own 12-metre height, and the views across the bay towards Ko Som and Ko Pha Ngan are spectacular, making the walk up the staircase worthwhile. The stairs are guarded on each side by brightly painted and mosaic-studded nagas (Thai mythical sea serpents). Visitors drained by the heat and the trek up the stairs are cooled by a sea breeze as they gaze past prayer bells and over the boat-filled bay. Big Buddha satisfies both the religious tourist as well as the sightseer. 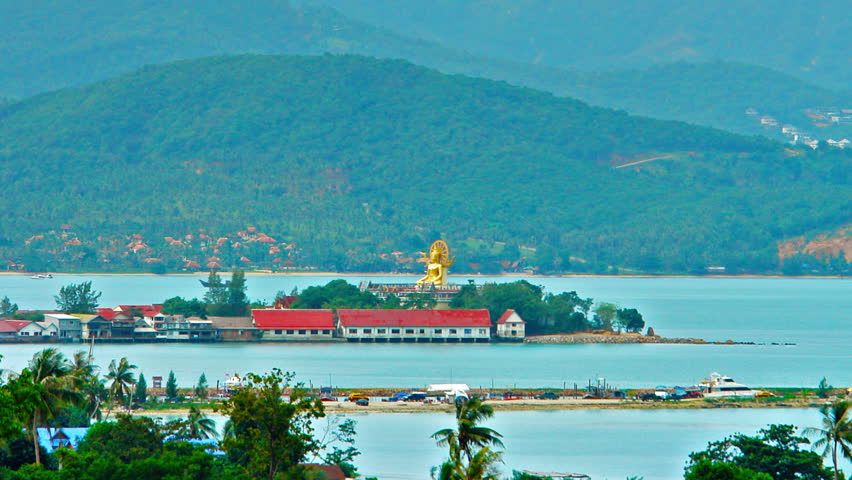 B ig Buddha was initially intended to be a monastery, but when the monk in charge died, plans changed, and the giant Buddha was constructed in the 1970s. The statue sits on a small island, not much more than a rocky outcrop, called Ko Fan (Deer Island). A wooden bridge once connected the island to the mainland, a distance of about 200 metres. After this bridge was damaged in the late 1970s, landfill was dumped to create a causeway to Big Buddha. Unfortunately, this meant that the sea currents could no longer flow naturally and the coral in the small bay was destroyed. At the water’s edge, you’ll find a selection of statues of mythical characters and mermaids.