A true fan of swimming may be charmed by Chaweng, yet, may be appalled. It depends on the part of the beach you choose for a swim.
The northern part of the beach, situated opposite a small satellite island Koh Matlang, has the most winding coast line. Here, sand is soft and white, but the shallows stretch out for a long distance, sometimes as far as a couple of kilometers. These shallows are picturesque and very appealing for walks on sand, photo shoots and sunbathing. However, you have to go around large areas of the sea bed, abundant in seaweed and sharp chips of corals. Farther, after the shallows, coral gardens start, that encircle the bay of the northern Chaweng. It is possible to find patches of clean sandy bed between them, where anyone of any age goes wearing goggles or masks to watch diversity of multi-coloured small fish of different kinds. The sea becomes really deep behind the corals, it is azure and pure during a still. Closer to the central part of the beach, at the distance of about one kilometer, a stony ridge stretches out along the coast, it is vey shallow, there is silt and seaweed on the bed. You don’t feel like going into the water, even wetting your feet.

T he centre of Chaweng is less attractive in terms of swimming from the northern end, than from the southern one. Starting from the northern Chaweng, s atony ridge reaches this area. The sea bed is still unappealing – the sand contains some silt and seaweed, but the depth by the shore gets better. The coast line of the beach straightens out in the centre, and Chaweng spreads before your eyes up to its very southern end. The farther southward, the cleaner the water of the beach becomes, the bright sun coloures it into all the shades of rainbow, white sand embraces your feet. The depth from the shore grows quite fast, although the impatient may still complain. On the other hand, having walked a distance of the depth ‘up to a belly’, you will find yourself in the kingdom of the infinitely blue depth. The sand on the bed is light, clean and uniform. Except for an occasional reddish leaf of frangipani, carb’s shell or a tiny pyramid of grey sand, left by a harmless sea worm. 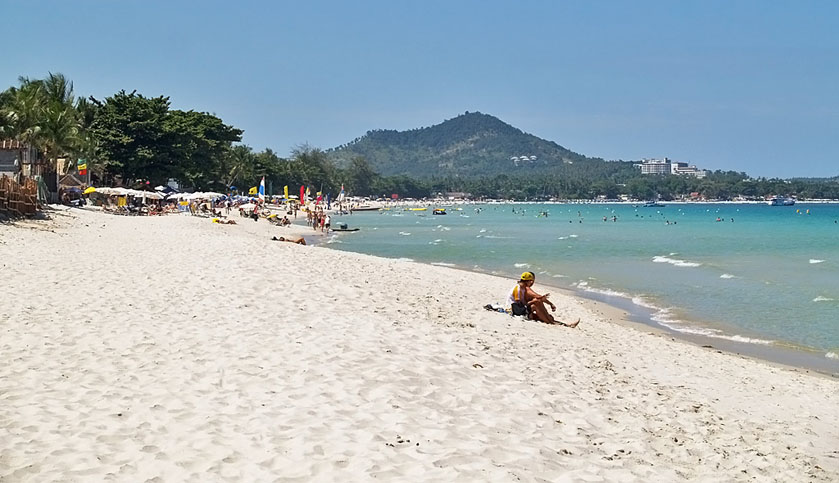 Worth knowing: In winter, from November till January, though, the sea of Chaweng, like the whole eastern coast, is choppy. High waves are not rare, they bring with them dirt and mud. Still, some holiday-makers like dabbling by the shore in this period, getting a real thrill from the element.

The liveliest and the most extended beach of Koh Samui, Chaweng is diverse, it can’t be generally characterized. First of all, it is considered to be the beach for joyful youth. DJ bars, parties with fireworks, pubs and clubs – it is all in abundance here.

We all have wings. Few of us know how to use them.

But, in fact, it may also be a serene corner for a quiet romantic or family holiday – with berry sunsets and sandy shallows in the middle of crystal ripples. So, in its northern part life is more measured and calm. The noises and clatter of night parties hardly ever reach this place. The shore is covered by beach restaurants and small restaurants, which — upon dusk – lay their full-of-ice counters with fresh seafood for your choice and light luring multi-coloured lanterns, hung on the crowns of trees and palms.