T he sea on Bang Kao Beach is shallow with a bad – mainly oozy and stony – bed. In the east the area of shallow water is the most extensive: it stretches into the sea for more than 400 meters. The strip of the shallows narrows westward of the beach. Dense coral gardens start just after the shallows. It is because of them the sea bed is so unpleasant. On the one hand, they are the centre of concentration of sea wildlife and produce a lot of organic waste. On the other hand, they restrain the tide, preventing it from clearing the bed.

I n the east, by the mouth of the flowing into the sea little river, the bottom is covered with a dark-brown porridge-like layer of silt. The place swarms with small crustaceans, crabs, diverse clams and worms. You can even hear this wildlife while walking during low tide: something always squelches loudly, little bubbles appear and disappear. The shore in this part of the beach is covered with a mixture of coarse sand and chips of corals and seashells.
In the centre and in the west of Bang Kao the bed is more pleasant than in the east, yet stony. By the pagoda Laem Sor the stones become much bigger and almost cover the bed completely. The sand on the shore is fine, light, pleasant for walking. 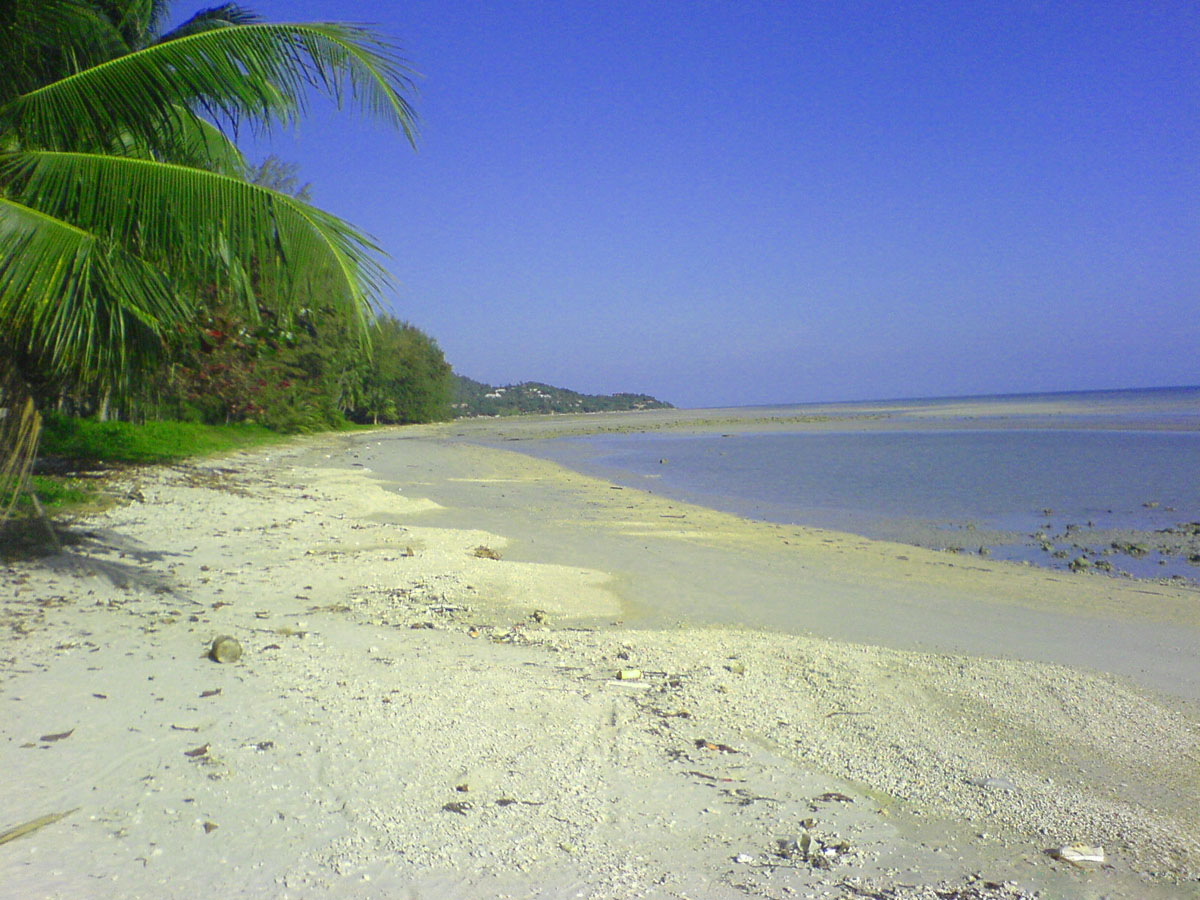 I n terms of cleanliness, Bang Kao is the worst beach on Koh Samui. A rubbish dump in coastal shrubs – near the pagoda Laem Sor – makes the most unfavourable impression. There are not only bottles, cans, and other kinds of packaging there, but also slippers, tatters scrap tires – to put it in a nutshell, very different stuff.
Bang Kao is an extensive beach in the bay of the same name, restricted by two capes: Laem Set in the west and Laem Sor in the west. It takes up more than 3.5 km of the southern coast of the Koh Samui island. There are bif palm groves stretching along the whole beach. It is quiet and deserted in the neighbouring area, there are only buffalos pasturing. From the foot of palm trees a bindweed with pink and purple bell-like flowers stretches out to the water like a green carpet. In the central part of the beach you may come across a group of traditional fishing boats. They dug special small canals for them because of the shallow bottom. It is so much fun to chase the school of fry, swimming hastily in the coastal shallows.

D Despite tranquil and unhurried life in the beach, Bang Kao is large (for the island) and self-sufficient settlement. There are plenty of big and small restaurants there, among which one can find not only Thai and Chinese ones, but also European ones, catering mainly Italian and German cuisine. There are also quite a few shops, except for large supermarkets. There are also chemist’s, optician’s, there is even a book shop, besides there are markets and fairs.
If you wake up very early and go for a walk along the streets of Bang Kao, starting from the Ring street, you may find a market, where locals as well as café and restaurant owners buy fresh food. You can broaden your mind in terms of exotic fruit, seafood and other mysterious Thai treats. You can achieve excellent results in your studies of Thai fast food and other unknown tasty things at a weekly fair called Walking street, it happens on two interconnected streets by Bang Kao Pier.

T here are a lot of dogs on Bang Kao. It is particularly noticeably when you walk alone along an overgrown parkway in the west, not far from the pagoda Laem Sor. A bit scary. If you are impressionable, you will be even more afraid because of dilapidated haunted huts, springing up among trees. By the way, the western part of the beach has its own name – Laem Sor Beach, after the name of the pagoda and cape. Judging by numerous fire pits, locals like having picnics here. Probably, a great amount of litter doesn’t prevent them from enjoying the nature and rest.
Despite its being remote from tourist centres of Koh Samui (about 10 km from Lamai and 20 km from Chaveng), you may easily find a wide range of places for stay to rent, and the construction of new bungalows is in full swing. There is no entertainment infrastructure in the area yet. So it is no wonder, that most of holiday-makers are pensioners.
You can see quite well two neighbouring little islands from Bang Kao Beach: Koh Taen (a bit bigger) and Koh Matsum (a bit smaller). You can make a trip there, have a picnic and imagine that everything in the world has been created only for you. It is much easier to rent a boat on the beach near Bang Kao – Thong Krut or Thong Tanote, which is farther to the west along the coast.