P ang Ka (Phang Ka) is, perhaps, the most shallow bay on the island. At low tide, if you want to get into the water at least up to your knees, you will have to walk up to its estuary, and it is 1.5-2 km away from the centre of the beach. Actually, even high tide hardly improves the situation, it only covers patches of sandy bottom. The bay estuary is blocked by colonies of corals and seaweed, where you may easily see not only tiny fish, but also a family of black sea urchins. Those colonies are not continuous, that’s why it is possible to find a passage and go on walking to open sea: anyway, the water won’t reach even your shoulders.

T he sand on the shore is a light creamy powder, which, unfortunately, contains some litter. The northern edge of the beach is distinguishable by a levee of large stones. The seabed by the shore in the central part of the coast is the same sand, but covered with small black cone-shaped seashells. Further, down the way, in 0.5 km, the seashells disappear, but they are replaced with areas, covered with small coral chips and stones.
Phang Ka beach is a vast space for ‘soaking feet’. The bay of the beach forms the northern coast line of a cape Laem Hin Khom and overlooks west, thanks to that it boasts its beautiful sunsets. But it is also beautiful on a sunny day, at low tide, when stretching out up to horizon creamy sand banks make it look like a piece of a layer-cake with a turquoise glazing on top. It is one of ‘back countries’ of Koh Samui, remote from the ring road. In the north, Pang Ka borders an extensive beach Taling Ngam, which is also called a ‘Beach of five isles’. A southern neighbor is Tong Tanote Beach, it occupies the southern side of a cape Laem Hin Khom. 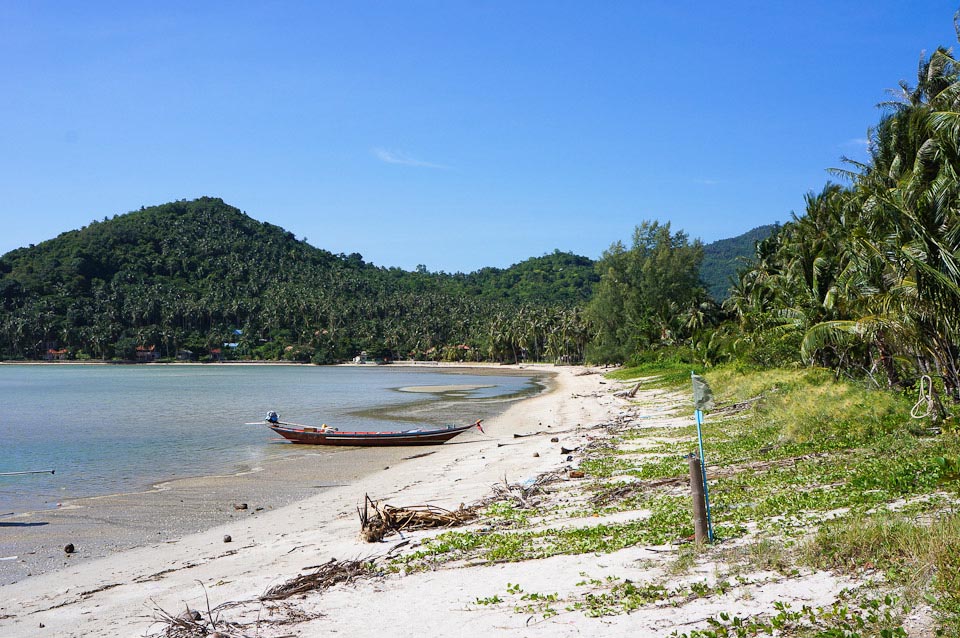 I n order to get to Pang Ka, first you should take a turn from the ring road into the road 4170, and go along it up to the crossroads with Snake Farm, 24-hour shop with necessaries ‘7-Eleven’, and an arch leading to the temple Wat Kee Ree Mas. Right here, you will see a unobtrusive turn with a blue sign in a golden frame ‘Pang-Ka Road’. This the one you need. Then, drive through a small not so densely populated Thai village and banana thickets, following the signs of restaurants Chom View and Pang Ka Paradise Resort. Both of them are situated on the coast of Pang Ka bay, so you can go to the sea through them, otherwise go up to the end of the road, which goes into the beach next to a boutique hotel ‘Elements’.
The coastline of Pang Ka is built up with one-storey bungalows, on the right and on the left green coconut hills rise. It is so peaceful here, that you may come across a little white heron (Egretta garzetta) – a bird, which a citizen may only see in the zoo. But on Pang Ka, it walks on sandbanks and catches small fish and crayfish.

A s for entertainments, this area can’t offer much. One has to be inventive here, which some people may consider some kind of advantage. The turquoise horizon is enchanting, but walking on the shallows for about 2 kilometers – is a pastime for truly patient or placid. On the other hand, it is a good training for legs, the most important thing is not to get sunburnt. An interesting option: to go swimming on an inflatable matrass – among coral thickets, in the estuary of the bay, you may find wonderful oases with absolutely pure bed and water up to knees. Getting away from it all here just for a couple of hours will change you completely. But don’t forget to apply a sunblock very generously and to put a sun hat on! A plastic canoe would be a more sporting alternative of a matrass. 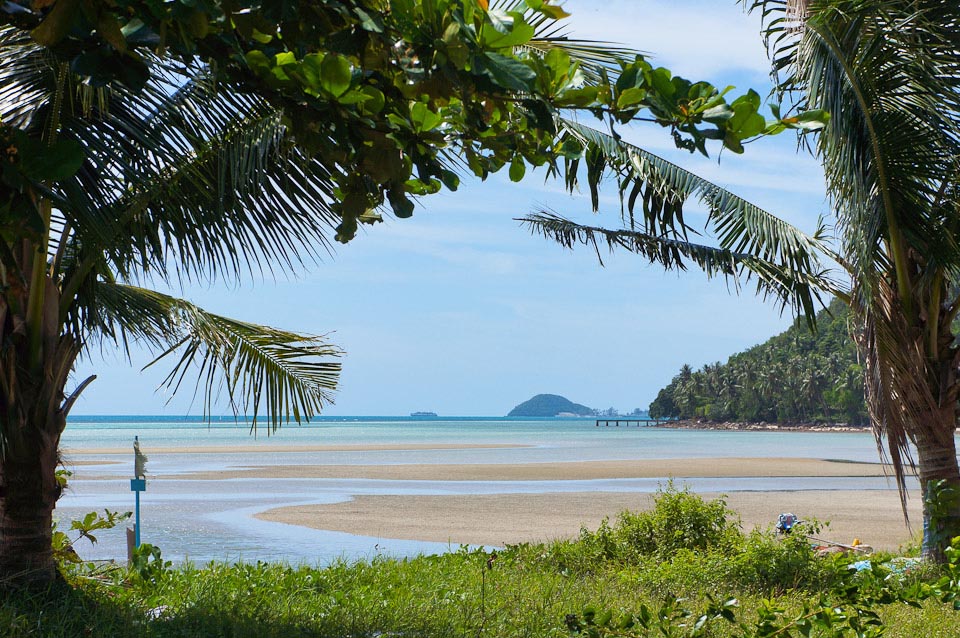 B esides, there are a couple of motor boats by the seashore, which you can hire and go to the sea, and also explore nearby coral islands, swim with a mask there or simply sunbathe and swim. There are a few small restaurants on the beach, but they are noticeably overpriced (curry costs about 300 bahts, while it usually costs 70-100 bahts in cafes of such level). One of possible explanations of that is isolation of the beach. As for shopping, there is no place for it on Pang Ka. In search of it you will have to travel either 13 km northward – to the administrative centre and the main port of the island – Nathon, or 10 km eastward – to a small village Hua Thanon.