I n terms of beach rest, Taling Ngam unquestionably falls short of such beaches, as Lamai or Chaweng Noi with their easily accessible depth and absolutely clean bottom. The drawbacks of Taling Ngam – shallow sea and the bed, which is not always pleasant for bare feet. All the beach is subject to strong low tides, during which the water may retreat for a kilometer and even more. But at high tide, there is not enough water for a proper swim by the shore.
The seabed is sandy, but often silty, and in the south there also sharp stones, chips of dead corals and hordes of diverse sea creatures, which makes the entrance unpleasant, or even impossible – at least barefoot. Dark patches in the water are visible from the shore – these are thickets of live corals, in which not only beautiful colourful small fish live, but also so unfriendly to tourists creatures – sea urchins. So, even if you reach a deep place, you won’t be able to swim freely.

O n the other hand, all those disadvantages may easily turn into a great advantage. You only have to hire a boat, a usual one or for kayaking, and, having passed all the troubles, find yourself above the mass of absolutely transparent water. There no one around you – only you alone with astonishingly beautiful world. Meditative swimming, absorbing snorkeling, fishing, watching sunny azure and deserted islands – everything at your disposal and only for you.
You shouldn’t forget that Taling Ngam is mainly a wild beach. That’s why you shouldn’t expect ideal cleanliness: there will be litter on the sand, snags, old palm branches and coconuts, there also may be splinters of bottles. The sandy strip is well-groomed only on the premises of so scarce here hotels and restaurants. It’s a flipside of isolation. 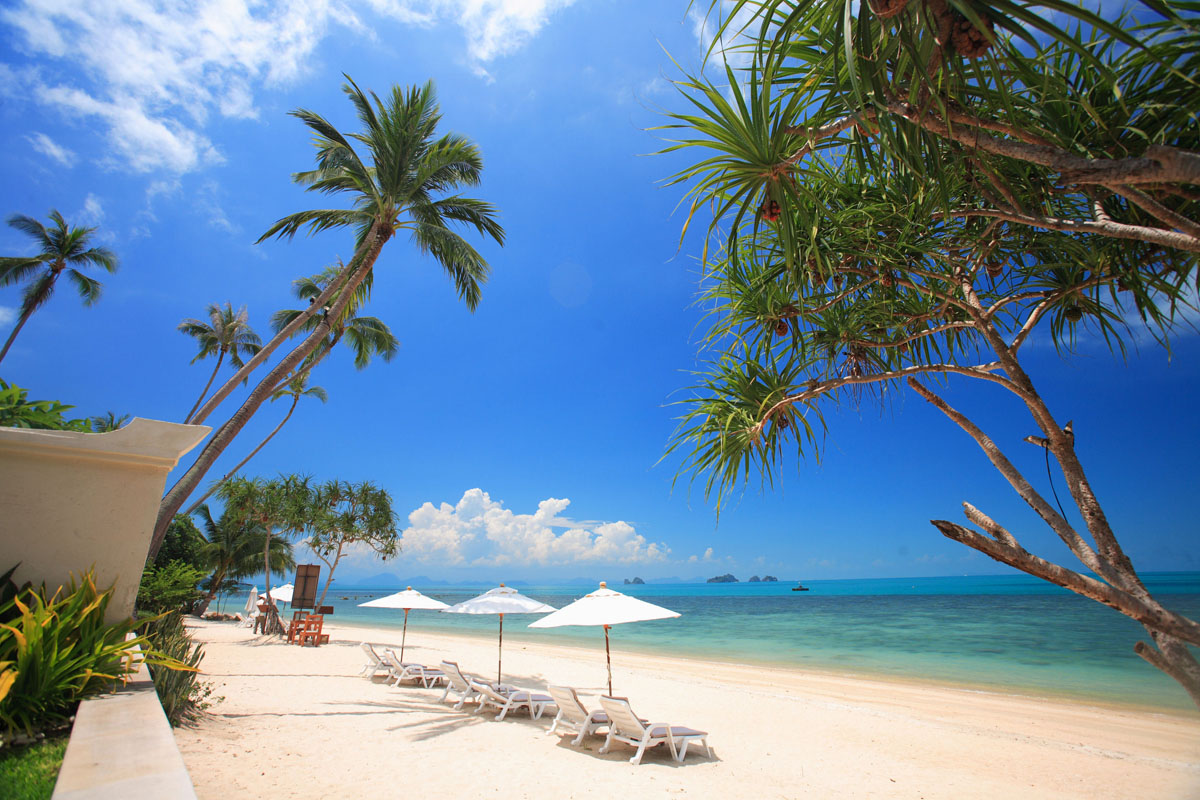 T aling Ngam is a district in the south-west of Koh Samui, wilder and less touristic than all the rest parts of the island. Probably, that’s why it is considered a paradise corner, the like of which can’t be found anywhere else on the island. Most often, when they mention Taling Hgam, they mean an extensive strip of the sandy coast from Laem Yai Krai cape up to a tiny Phang Ka bay.
In its northern half, the beach has a gentle sloping plain terrain. Endless groves of coconut palms reach the very seashore. Their slim silhouettes make way for those, who were lucky to get here, and suddenly an enchanting view comes into sight: white sand and dazzling azure of the sea surface up to very horizon. This views becomes even more astonishing thanks to the blue shades of archipelago Ang Thong National Marine Park and five neighbouring tiny isles: Koh Thalu, Koh Din, Koh Chetta Mun, Koh Mae Koh and Koh Malaeng Pong. Because of the latter ones, Taling Ngam is also sometimes referred to as the beach of five isles.

S Southwards, the coast gets more and more inaccessible. There are covered with seashells rocks, rising from the sand. There are sheer cliffs rising above the water, covered with dense tropical vegetation. Sometimes, you may come across small stairs leading upwards to one of private villas of Taling Ngam, which chopped in the rock. You can only imagine what kind of panoramic views come into sight of their owners or tenants.
There are very few resorts on Taling Ngam, among them there are inexpensive beach bungalows and a five-star hotel ‘Sunset Beach Resort & Spa’. It lacks tourist infrastructure of the kind that you can find on Chaweng or Lamai, and roads are not so smooth and level here. The nearest shops and markets can be found in Nathon, the administrative centre of Koh Samui, which is about 20-min. drive from Taling Ngam. Beach with fireworks, pubs and night clubs – you should go to Chaweng in search of it all, or to Lamai, which is closer: the trip will take about 40 minutes.

T haling Ngam beach is perfect place for couples. The beach boasts its sunsets. Having stayed here, you will witness an uncommunicable play of light and shade every night – a true heavenly art by the sky. Or you can come here just for a few hours and witness a sunset, sitting comfortably in one of the beach restaurants. It is so easy to enjoy life here. You get an impression that the time has stopped, and the world has achieved its perfection.
If you travel to Taling Ngam beach, be ready to come across the inhabitants of tropical forests. For example, you may encounter a big fluffy spider or a gecko, that is by far bigger than those cute ones, everyone got accustomed to in more lived-in parts of the island. There are some snakes, too. It is still jungle, and its native inhabitants have been scared away by hordes of tourists from here yet. However, the guests of expensive hotels are carefully guarded from emotional stresses, and don’t let undesirable visitors in.
How long Taling Ngam will keep its magic is unknown. The part of the island becomes more and more popular with developers. Nowadays, they built mainly private villas here, but sooner or later this coast will be occupied by hotels and resorts of different caliber.