T ong Yang bay is an ambivalent beach. Its southern coast is absolutely dissimilar to its northern coast, and the best place for water entertainments is in the middle. The depth in the central part is quite comfortable, the bed disappears in approximately one hundred meters. The entrance into the sea is very gradual, crumbly reddish sand is beneath your feet. The water on the whole beach is slightly muddy, but it gets most transparent in the centre. Moreover, this part of the beach is the most well-groomed and quite clean.
The northern coast of Tong Yang bay is covered with fine sand of different shades: from white to grey. The are a lot of sea shells on the shore and in the water. The sea is shallow and noticeably muddier in comparison to the central part of the beach. The more southward, the more litter there is, there are even whole collections of different rubbish.

O n the southern coast, the descent into the water is the most abrupt and the fastest, but the bottom is less pleasant, than in the centre: the sand is mixed with black cone-shaped sea shells. The coast is not the tidiest one, there are old ropes and other traces of activities of inhabiting this area fishermen’s families.
Tong Yang is a bay, situated in the west of Koh Samui between the island capital Nathon and a peninsula with a naval base Koh Samui Naval Base. The beach on the coasts of the bay is also called Lipa Noi – after the name of the settlement, which occupies a rather big coastal area in this place. There is sometimes some confusion due to the fact, that on the neighbouring beach, more southward from a naval base, there is the port for ferries Raja Ferry, which is called Lipa Noi Pier. As a result, most people know it as Lipa Noi as well. 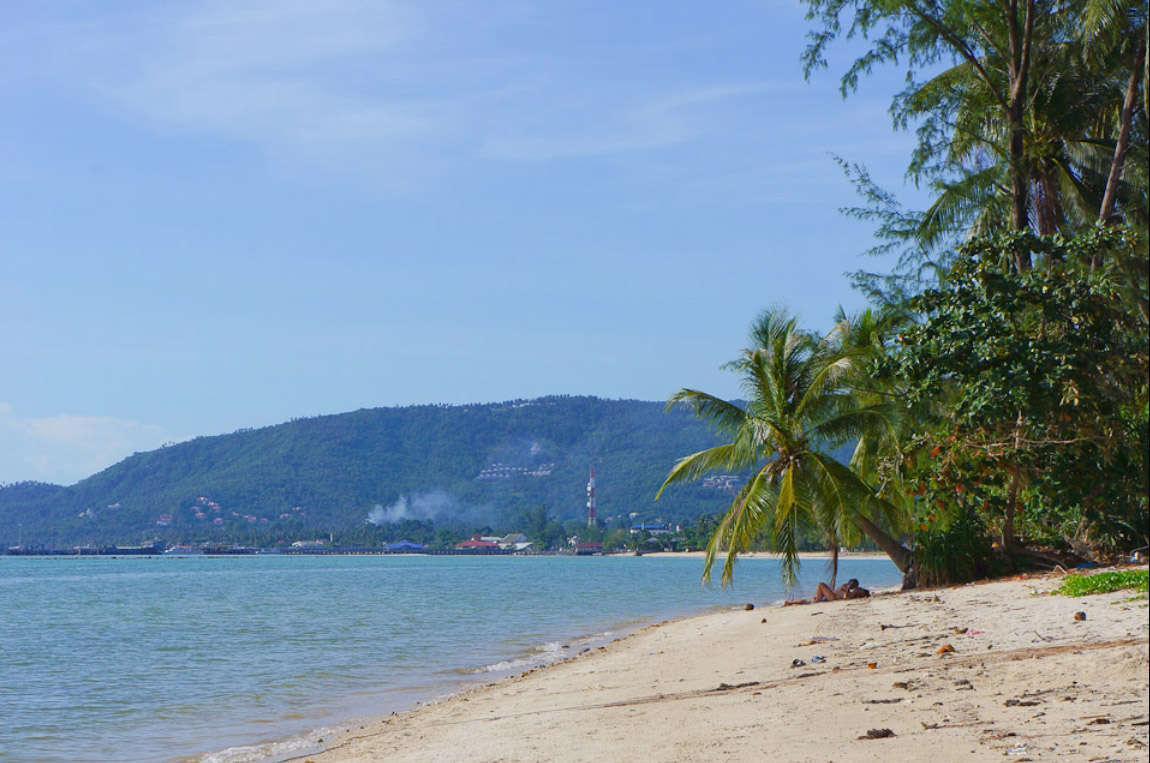 A lthough Tong Yang is situated in a less lived-in part of the island, traditional beach amusements, such as sea scooters and amateur sail catamarans, reached this place. A customary view, opening from this coast – ferries and passenger catamarans cruising along the horizon line, departing from the port of Nathon or arriving in it. The green setting of the beach is very diverse: coconut palm trees, and in addition to them quite a few of plumerias, coniferous trees and shrubs. The peculiarity of the local landscape is the fact, that you get an impression that you are on holiday not on a tropical island, but at a lake somewhere in more accustomed area.
The coast of Tong Yang gives you an excellent opportunity for an enjoyable walk. Walks on the sand can be spiced up with more thrill, if you accompany them with picking up sea shells or other sea ‘gems’: by the way, there are bigger and more interesting specimen here, than, for instance, on Chaweng or Lamai.

T here are not so many restaurants in the bay, but you definitely won’t starve. Tong Yang is not that remote spot. There is Nikki Beach here – a beach club of an international chain, which is regularly mentioned in society columns. Tong Yang can’t boast numerous shops, but this disadvantage can be compensated in the neighbouring Nathon, where there are clothes and food markets, boutiques with clothes and interior accessories, and a couple of shops selling natural Thai cosmetics as well.