B ang Po is a beach with fine and light sandy blanket. Right by the water the sand is a bit on coarse side and it is reddish; as for the seabed, the sand there is of light creamy shade and dust-like, which makes an impression of clamminess. The beach is not very wide: about 20 meters throughout its all length. The average depth near the shore is up to knees, in some places – shallower, in other places – deeper, there are spinneys of corals along the whole coast line, they are about 150 meters wide, so one can’t go into the water farther than a couple of meters.

T he beach is good for small kids. Equipped with colourful toys, inflatable armbands and sun hats, they have a great time by the very edge of water. As for adults, they might as well soak their feet nearby or sway sleepily on an inflatable matrass. Yet, you may rebel: hire a plastic canoe, sail cross the area of seaweed, and dive into the water far away from the shore.
Another way out is to travel to a secluded tiny beach Ban Tai, that is situated farther eastward. It is separated from Bang Po by a deposit of large rocks. Walking through them is tough, but possible, unless it is during high tide. The easiest way to walk through them is on top, or you can wade round them along the seashore, the depth will be approximately up to your waist. 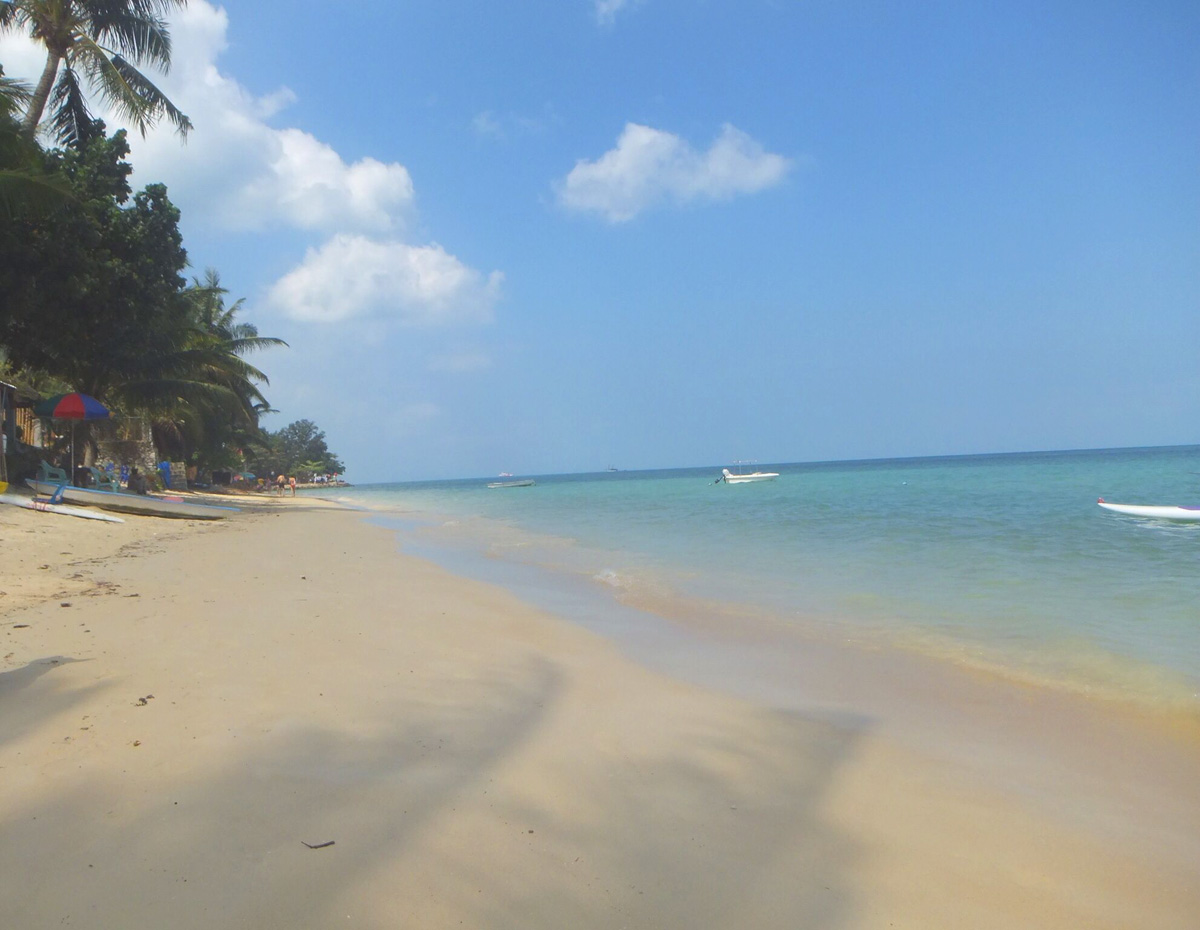 T he strip of Bang Po Beach is not varying, with very slight twists and turns, it stretches for a bit more than 3 kilometers. It is one of the northern beaches of Koh Samui. In the west, it ends with a little stony cape Laem Noi, and in the east it borders with a beach Ban Tai. Ang Thong Marine National Park comes into view from Bang Po, if you look at the west. By the way, the islands of Ang Thong became the setting of a book by Alex Garlend ‘The beach’ , on which a very well-known film, starring Leonardo DiCaprio, was based. If you look northward, a neighbouring island Phangan will come into view. The ring road goes just behind the strip of the beach, it is very easy to get here from any port of the island.

N ominally, Bang Po Beach could be divided into two halves. The eastern half – chains of refined bungalows among ideal coconut trees and sign plates ‘Private. No entry’.
In the western half, there are fewer palm trees, there are lots of fishing boats by the shore, and small fish restaurants, which were built by their owners with everything they had at hand. Bungalows here match the restaurants, but they are inexpensive and situated right by the blue sea. There are some pretentious houses, but they are en exception to a rule. As for sights, there are hardly any on Bang Po Beach. The nearest oases with shops and markets are on Maenam, that is 5 kilometers from the centre of Bang Po to the east, and on Nathon – 7 kilometers to the south.