M aenam is a perfect beach with imperfect sea. The sea bed here is sand with silt, as a result, the water is muddy and cloudy. In tropical water, it is preferable to see if there is something unusual near you. Occasionally, large and dangerous jellyfish and other unfriendly inhabitants of the deep sea approach the shore. The safest way of swimming is, of course, near the shore. Basically, this is what local holidaymakers do.
Apart from that, everything is fine. Beautiful sand of warm caramel shade reminds of coarse-grained cane sugar. The sea is deep, and an entrance into it is steep and fast. It is enough to move a couple of meters away from the shore to get covered with water. Because of that and cloudy water, you have always keep a weather eye on little kids.

M aenam is one of the most popular and civilized beaches on Koh Samui, and, undoubtedly, one of the most picturesque ones. It occupies a large area: its length is more than 4 km. The turns of coastline are mainly trimmed with short leafy palm trees, thanks to which the beach sometimes resembles a real tropical garden. It is inexpressibly pleasant to lie in hammock in its shade near your bungalow.
Maenam beach has its own particular peaceful and laid-back atmosphere. In spite of the fact, that its entire coast, like in other popular spots of the island, is occupied by numerous bungalows and other building to let, the beach doesn’t strike you as densely populated resort, which is characteristic of Chaweng, for example. Walking on Maenam coarse caramel sand, you are unlikely to come across a noisy party. It is a family beach. Here, Russian and European kids play by the sea, couples of all the ages speak to each other quietly, elder tourists paddle in the water. Maenam is for those, who look for serenity and solitude, but not without the merits of civilization. 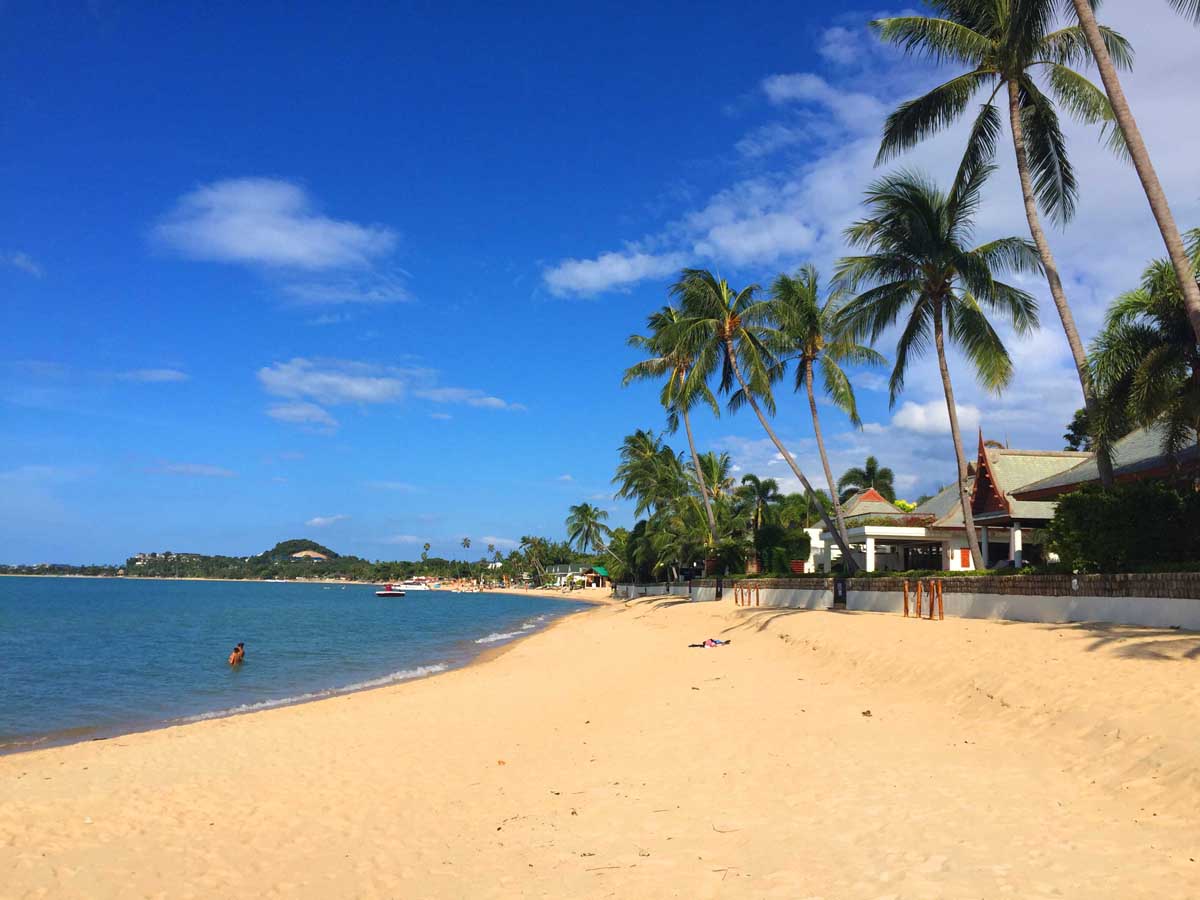 T he view from the beach only sets off its meditative charm. Light blue outlines of nearby island Koh Phangan are somewhat akin to Chinese watercolor. And when it gets dark, the opposite coast is illuminated by lights and often by fireworks. This neighbouring island is about half an hour trip away from Koh Samui. There is a big rave there, which attracts dozens of thousands people from all over the world – Full Moon Party, it takes place monthly during full moon. So, if you get bored with idyll, you only have to buy tickets on Lomprayah pier, situated in the western part of Maenam, behind Laem Na Lan cape, and join crowds of revelers, going mad to music.

D Despite tranquil and unhurried life in the beach, Maenam is large (for the island) and self-sufficient settlement. There are plenty of big and small restaurants there, among which one can find not only Thai and Chinese ones, but also European ones, catering mainly Italian and German cuisine. There are also quite a few shops, except for large supermarkets. There are also chemist’s, optician’s, there is even a book shop, besides there are markets and fairs.
If you wake up very early and go for a walk along the streets of Maenam, starting from the Ring street, you may find a market, where locals as well as café and restaurant owners buy fresh food. You can broaden your mind in terms of exotic fruit, seafood and other mysterious Thai treats. You can achieve excellent results in your studies of Thai fast food and other unknown tasty things at a weekly fair called Walking street, it happens on two interconnected streets by Maenam Pier.

I t is very convenient that Maenam has its own post office. It is located closer to the eastern end of the beach on the ring road. A holiday-maker can send greetings with views of Koh Samui and new impressions to his relatives or friends.